Earlier this week, Taiwan unveiled its new Forest Bus for public transit. The bus looks just like any bus from the outside, but from the inside, it is covered by moss, and several plants and flowers. Once you step into the bus doors, it really feels as if you’ve been transported into the middle of a rain forest. And passengers don’t have to worry about the smell. The bus has the fragrance of the beautiful flowers that lines its walls. 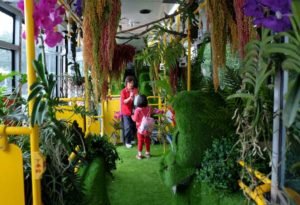 The bus is a single-deck city bus that can seat up to 20 people. It has its interior converted to feature several lush and colorful plants such as ferns, shrubs, and grass. The mobile green house is also decorated with several flowers including several kinds of orchids, ginger lilies and many more. The bus runs a special route that takes it to the heart of Taipei, the capital of Taiwan. Among its stops includes an art museum, a night market, and one of the more popular temples. 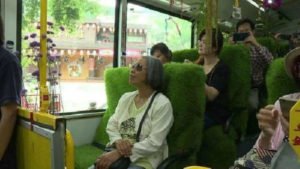 “I hope the public will feel that it’s a beautiful and interesting experience,” said its creator, florist Alfie Lin, “They can smell the scent of summer on the bus and see the vibrant green plants to feel messages from nature.” Lin created the bus because he wanted to add a touch of nature for commuters who are too busy in their daily routines to look around and appreciate their surroundings. So far the public has embraced the forest bus, and there are even several passengers that queue outside its stop. The bus is toll free and is currently on a trail for a week.