In South West Wales, a seven year old girl wanted to give back to a hospital’s cancer ward after it had treated her father for his condition. The little girl, named Elly Neville, was originally aiming to raise £500, which in itself is a feat. But through her fundraising efforts, Elly was able to raise over £100,000 for the cancer ward, much to the pride of Elly’s parents and the Withybush Hospital. 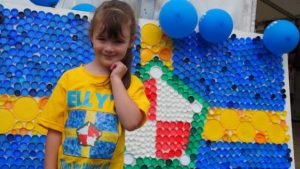 Elly’s fundraising efforts started after her father, 54-year old Lyn Neville, was treated at the Withbush Hospital Cancer ward for a rare type of cancer. She started with a crowd funding page called JustGiving and offered to make a collage of the Pembrokeshire Flag for any donations. The page also mentions where the funds will be used for. Funds are still being received at Elly’s active JustGiving page. 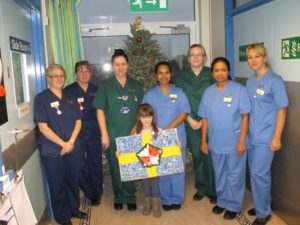 “Elly recently won first prize in a competition at school to make a collage of the Pembrokeshire Flag,” said Lyn on Elly’s JustGiving page. “The competition was run as part of Pembroke Dock Community School’s St David’s Day celebrations. We have decided to use the flag to raise valuable funds for a cause which is very close to our hearts â€“ the refurbishment and upgrade of Ward 10 at Withybush Hospital, making it once again a dedicated cancer ward.” Ward 10, also known as the cancer ward, and the Chemotherapy Day Unit (CDU) at Withybush Hospital has already used the funds from Elly’s fundraising to purchase new equipment for the facilities there. They have also upgraded equipment used for treating cancer patients.