In Dubai, the local police force is breaking new ground as it activates its first robotic policeman. The real life Robocop will help the local police to collect evidence and identify wanted criminals in and around the city. The robot cop is part of a government program that aims to replace the human police force in fighting crime in the city. According to the Dubai Police force, if this experiment goes well, they plan to have at least a quarter of their police force made up by these “Robocops” by 2030. 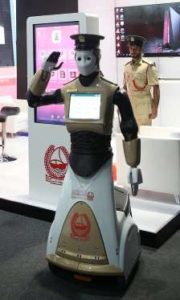 The first official robot police officer made its debut at the 4th Gulf Information Security Expo and Conference (GISEC) in Dubai. The robot was designed with the colors of the Dubai Police Force and is made in the average height of a male human. The robot is capable of shaking hands and making a military salute. The robot moves with the use of its motorized wheels and comes equipped with cameras and facial recognition software. It can also read car license plates and can provide the police with surveillance video in the populated areas of Dubai. 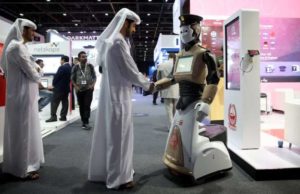 “These kinds of robots can work 24/7. They won’t ask you for leave, sick leave or maternity leave. It can work around the clock,” said Brigadier Khalid Nasser Al Razooqi, the director general of the Smart Services Department at Dubai Police. “We now see the new generations who are using smart devices – they love to use these kinds of tools. A lot of them have seen the Robocop movie and they said: you guys, you have done it.”