Being a police officer can be very difficult, especially when you are in a third world country. It can be very difficult doing your job, and it is almost impossible to do anything else. But this police officer in Thailand has gone viral because of his T-Rex costume and how he chooses to use his spare time to teach children and their parents from obeying traffic laws. 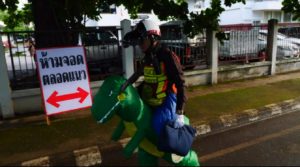 Sergeant Tanit Bussabong is a police officer in Nakhon Nayok, located just a few hours outside of Bangkok. Bussabong has over 20 different outfits that he wears for traffic duty, including a Minnie Mouse costume and a Bear costume. He wears these outfits because he works outside a kindergarten. He says he wears these costumes mostly for the children. Despite the many different outfits, he is known for wearing the Tyrannosaurus Rex outfit.Â  The furry outfit is complete with arms and is very popular with the kids. The T-Rex outfit makes it look like he is riding a dinosaur.

Bussabong can be seen high-fiving students and teaching them about traffic. He started wearing the costumes a year ago, and he says that the outfits make him approachable and friendly to the children.Â  Now, Bussabong has become a national treasure and a local tourist attraction. You can even see tourists wait for a lull in the traffic so they can get a picture or a selfie with the famous T-Rex traffic cop.

“They are happy, so am I,” said Bussabong. He also said that the “parents are also developing more respect for traffic laws.”