Earlier this week, an NFL player named Jermaine Gresham came to the rescue of a woman who could not get a flight home. Delilah Cassidy was coming home from Europe after traveling all day, when she learned that the airline was going to charge her extra for carry-on baggage. Because of the unexpected fee, there was a possibility that she would be delayed, or worse, stuck at the airport. That’s when Gresham of the Arizona Cardinals walked up to the woman and offered to pay the fee. 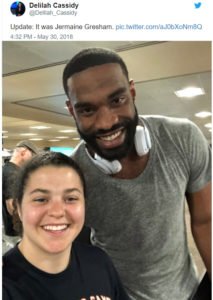 “Wow okay so the most amazing thing just happened to me and I can’t help but share it with the world. American Airlines instituted a new policy where you have to pay to take a carry-on onto the plane. Which is ridiculous but off topic.” said Cassidy on twitter. “I consolidate my bags into one and they measure it and they say it’s a little too big. They proceed to charge me $50, except they only take credit card, no cash. Since I got back from Europe, all my cards are being declined as Chase doesn’t know I’m back.” 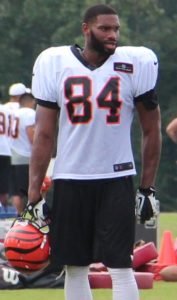 “They tell me that I’m going to have to miss the flight and head back to the ticket counter to pay down there. I’m pleading, devastated after a long day of travel. Then, this man walks up and says ‘How much is it?’ They tell him $50 and he says ‘I got it’. I am astonished and tell him I’m fine not to worry and he hands the lady his card as the American Airlines employees stand in shocked silence at this man’s generosity.”

Later on she found out who the Good Samaritan was and posted a picture with him on twitter with the caption: “Update: It was Jermaine Gresham.”