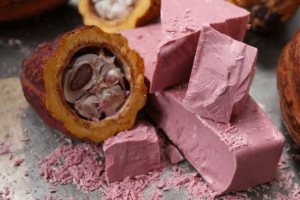 According to Callebaut, the new flavor has “berry-fruitiness and luscious smoothness”. The chocolate is named ruby chocolate after the plant it is derived from, the ruby cocoa bean. The bean is reddish pink, which is where the name comes from. There have been berry flavored chocolates before, but the red cocoa offers a distinct flavor that is unique because there are no flavors or coloring added to the chocolate.

“Ruby chocolate is very different and clever stuff. It’s refreshing and has a light, creamy texture,” said Angus Kennedy, a chocolate expert and editor of industry bible Kennedy’s Confection. “It tastes so light and fruity you don’t really realize you’re gobbling up one chocolate the other, so it means consumers will be able to eat more of it than other types of conventional chocolate. Whether this a good or bad thing depends on your point of view.” 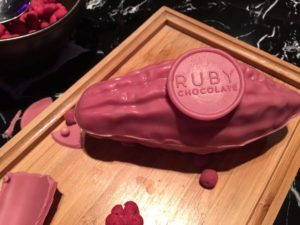 While the authenticity of the ruby chocolate is real, it still remains to be seen if it will work for the public. There have been several gimmicks and new flavors for chocolates over the years, and it could very well be another passing fad. But the fact that it is made by one of the largest chocolate manufacturers in the world gives it a big chance of succeeding.