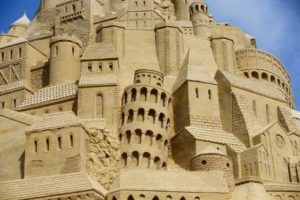 The team of sculptors spent more than three weeks at the western city of Duisburg in Germany. They spent most of their time working on the sand castle. They consider the world breaking structure a work of art, and it features sand replicas of the Great Sphinx of Gaza, the graveside of Elvis Presley, and the Rialto Bridge in Venice. A Guinness World Record official was on hand to mark the world breaking mark feat. The castle had overtaken the previous record holder, which was a sand castle in India, built in February. That castle was built as a world peace monument and was measured at 14.84 meters or 48.6 feet. 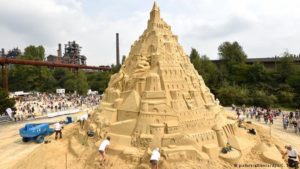 “It did not collapse because the quality of the sand was better than previous attempts, the weather was good and very good planning,” said Ukrainian sculptor Eugenia Kolot. The team of sculptors included artists from all over the world. They had gathered together last year to break the record, but failed in their attempt. This year, they used a different kind of sand, made from fine grains that measured less than one millimeter each. The decision made all the difference as they were able to raise the structure to break the world record.