Earlier this week, the King of Swaziland officially renamed his country into the Kingdom of eSwatini. He made this announcement on the 50 year anniversary of their independence from British rule. The name Swaziland has always been a contentious name. It is a combination of Swazi and England. The new name, eSwatini, means “the land of the Swazis” in the native Swati language. 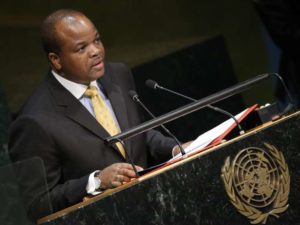 King MSwati III is the last absolute monarch of Africa. He announced the change of the name at the golden jubilee celebrations of the 50th anniversary of Swazi independence. It turns out it was on the same week of his 50th birthday. The king has used the name “Kingdom of eSwatini” for several years in the past, notably at the UN General Assembly in 2017 and at the African Union. But this is the first time that he officially changed the name of the country.

The king made the announcement to a large crowd that gathered in a stadium in the city of Manzini, 25 miles east of Mbabanem, the capital of the country. According to the king, they were reverting to the name that the country was called before they were colonized by the British. The African nation was a member of the British Commonwealth before it gained independence from Britain in 1968.

“I would like to announce that from today onwards, our country will be known as the Kingdom of eSwatini,” the king said. “Whenever we go abroad, people refer to us as Switzerland,” he quipped.