Thailand is known for the variety of temples that you can find in its borders. They are considered as sacred places and among the most visited tourist attractions. These religious hubs are also home to centuries old structures and buildings. But now these temples are being bolstered by more than just Buddha statues and sculptures of mythical creates. They are also now adorned by towering Transformers robots. 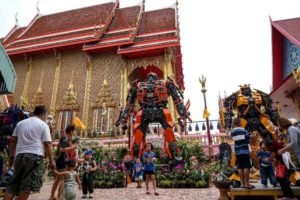 At least four Buddhist temples now feature intricate sculptures of Transformers and other comic book icons. But this isn’t an unwanted invasion; it was the monks of the temples that have commissions the additions to their temples. They believe that they can offer entertainment for the children that tourists bring along to see the ancient temples. It also does not hurt that it keeps the donations flowing. According to the monks, they have no spiritual purpose and serve only as a tourist attraction. More and more temples are now following suit, and monasteries all over the country are starting to commission more of these metal sculptures. 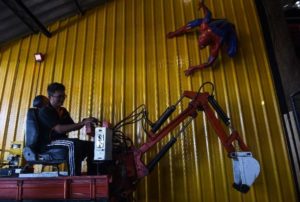 Most of these towering metal statues are made by Thai artist Pairoj Thanomwong. He runs a workshop where he uses blowtorches and heaps of recycled metal parts to make these sci-fi creations. The warehouse where he works out of is called Ban Hun Lek, which roughly translated, means the House of Iron Robots. The largest structures the workshop can make can reach seven to eight meters tall. These scuptures can be purchased for thousands of dollars.

“In terms of the products that people like, it evolves over time,” Pairoj said about changing trends,”Over the past 10 years, people used to like characters from Aliens and Predator, but now they like the Transformers.”