Grandmother Carries Baby in her Womb for Daughter

Mothers will do almost anything for their children. This is especially true for parents that want to save their kids from heartbreak and pain. This was evident for Sara Connell and her mother Kristine Casey. Connell was having trouble with her pregnancies, and each failure seemed to be harder that the previous. That’s when her 61-year old mother stepped in and offered to carry a baby for her. 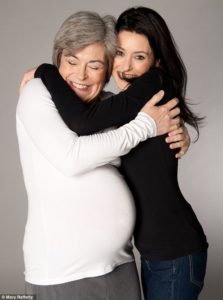 Connell was undergoing treatment for fertility and had tried to carry her own children. But after delivering two stillborn twins and suffering a miscarriage, she was very close to giving up. That’s when her mother Casey offered to carry her baby for her through surrogacy. Casey went through her own pregnancies without incident and was willing to give this gift to her daughter. 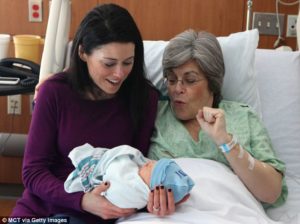 There were obvious reasons to hesitate, with Casey’s advanced age being one of the primary concerns. But after going through all the health risks and concerns with several doctors, the family decided to push through. There were several medical exams but all of them gave Casey the green light. The only concern they had was that Casey may suffer from fatigue because of her age. But Casey said if she could raise two children alone, she could do this for her daughter. And nine months later, Casey gave birth to a baby boy they named Finn. The family’s entire experience was shared in Connell memoirs, which she published. The book is called “Bringing in Finn: An Extraordinary Surrogacy Story”.