Bishop Curry is a 10-year old fifth grader from McKinney, Texas. Instead on focusing on boyish things like toys, sports, and other 10-year old girls, Curry has instead dedicated his time in inventing a small gadget that monitors the temperature inside of a car. This device can be used to help prevent hot car deaths, or deaths that occur because the passengers, and sometimes even pets, are stuck inside extreme and deadly temperatures inside a vehicle. 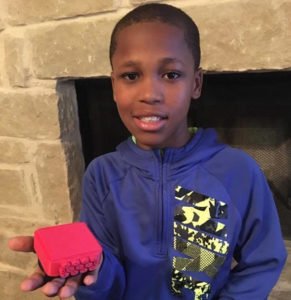 Curry was smart for his age, but no one expected him to come up with such a brilliant device. He named the small device “The Oasis” and it does more than just monitor the temperature of the car. Once the car gets to a certain temperature, it emits cool air and alerts parents and owners about the situation. The antenna on the device also allows it to alert authorities about the situation. Over the past 20 years, there have been at least 700 child deaths caused byÂ heatstroke because they were left inside a car.

Bishop says he was inspired to come up with the invention when a baby named Fern died, just down the street from where he lived. These instances are common in the southern tropical areas of the United States (areas such as Texas, where Bishop lives) where the temperatures can get really high in the summer. Curry has managed to raise over $25,000 for his invention thanks to the GoFundMe website. Curry and his family also have several manufacturers lined up to build the device. Curry’s father says they hope to begin production as soon as possible.