A third grader by the name of Christian Clark was born with a congenital heart disease. But even with such dire circumstances, he still looks to help out other people, when given the chance to fulfill his lifelong dreams. The Make a Wish foundation fulfilled his wish to become a superhero and patrol the streets of the lakefront in Chicago. According to Clark, he will be keeping his eye open for any villains that may be on the streets of the windy city. 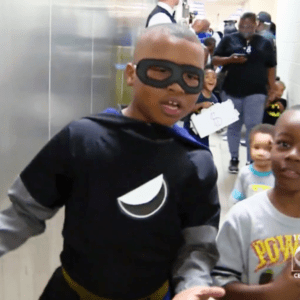 The 9-year old Clark was dressed up in full gear as the hero Super Black. Super Black was even given an escort by officers of the Chicago Police Department, where he would be going to be battling evil forces. “I’m going to be fighting crime all the way over there,” said Clark in his mask and cape. At the park, volunteers posed as villains so that Super Black could dispatch them with his powers and save the city. The police officers that had helped Clark, were also volunteers who offered their time while off duty.

“This guy’s our hero. He’s the superhero of Chicago right now. We can’t do this job by ourselves. We need all the help we can get,” said Lt. Robert Stasch of the Chicago Police Department. The police escort who accompanied Clark, as well as the volunteers were called upon by the Make a wish foundation. Clark has survived several heart surgeries because of his condition, and according to him, it’s his heart that gives him the superpowers he needs to save Chicago from evildoers.