A video of a high school student giving a gift to his school’s janitor has gone viral. The video shows the moment when 17-year old Tristan McAlister, a student at Stafford High School in Virginia, gives a new pair of shoes to 31-year old school custodian Angel Echevarria. The two have become friends for some years, and McAlister wanted to do something special for him. 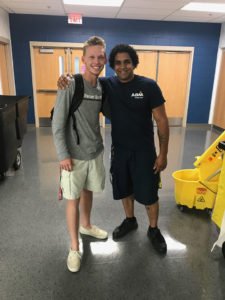 “I’ve known Angel for 2 years now and you won’t find a person who appreciates and smiles more than this guy,” McAlister wrote in social media, “I asked him what shoes should I buy and he picked out Jordan 8s and I asked if he had a pair and he said ‘No I have 4 kids, I can’t shop for myself’ so today I surprised him.” In the video we can see Echavarria’s reaction as a mix of shock and happiness. But he shows his gratitude towards the young student and even gives him a hug. 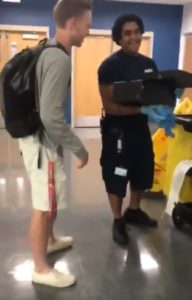 Despite their obvious differences, they have struck a friendship together. According to McAlister, he only took a video because his mother wanted to see the reaction of Echevarria when he got the gift. Afterwards, she also encouraged him to share the video on social media. But neither of them expected it to go viral. According to McAlister, despite his circumstance Echevarria is “always happy, always smiling, and always appreciative of his life”.

“I’m so thankful to have met him,” said McAlister, “He gives me a different perspective on life.”