Director Glenn Weiss had a very big night during the Emmy awards. Not only did he win for this show, but he also got engaged. And it happened in front of a hundred people at hand, with millions of people watching on television. Weiss was the director of the Academy Awards. He won for outstanding directing for a variety special show at the 70th Primetime Emmy Awards. It was his 14th Emmy win. But it was his proposal that stole the show. He was on stage and became sentimental talking about his mother who passed away two weeks ago. 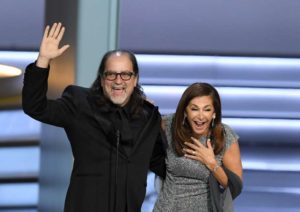 “Mom always believed in finding the sunshine in things and she adored my girlfriend Jan Svendsen,” he said. “Jan, you are the sunshine in my life. And mom was right, don’t ever let go of your sunshine. You wonder why I don’t like to call you my girlfriend? Because I want to call you my wife.” Svendsen was in the audience and appeared surprised by Weiss’s sudden proposal. 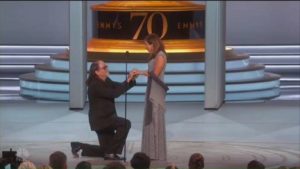 “I didn’t ask yet!” Weiss joked when Svendsen started mouthing the words yes as she climbed the stage, “This is the ring that my dad put on my mom’s finger 67 years ago. Jan, I want to put this ring that my mom wore on your finger in front of all these people and in front of my mom and your parents watching from above. Will you marry me?” Weiss got down on one knee and gave the ring to Svendsen then shared a kiss at the stage.