Herman Gordon is a beloved personality at the University of Bristol. He works as a custodian there and he is known by most of the staff and students. Gordon has a very positive attitude and his happy-go-lucky personality is very infectious. So when the people at the University found out that he hadn’t been home in quite some time, they decided to do something about it. 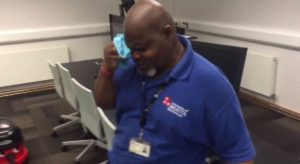 The students crowd funded some money to raise a little over £1,500 so that Gordon could go home to see his family. The gift was accompanied by a note from the students at Bristol that thanked Gordon for all his work and service and for the “positive energy” that he always has. “You have brightened many of our days and we want you to know that we love and appreciate you.” The staff at the University also offered Gordon some free time so that he could go home and spend time with his family. 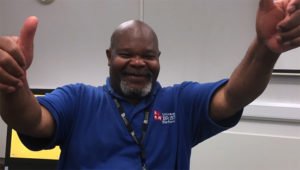 A video of Herman being surprised by the students was recorded and shared online. In the video, we see a very emotional Gordon wipe away his tears in gratitude as he thanks the students for such a kind and generous gesture. But even in an emotional state, Gordon couldn’t help but smile and spread his positivity to those around him. Gordon and his wife will be able to visit Jamaica for the first time in four years. The money will help them pay for the commute home to Jamaica and back.