In Russia, Scientists discover the remains of a naturally preserved mummy downstream from the Sayano-Shushenskaya hydroelectric power station on the Yenisei River. The corpse has gotten the nickname “sleeping beauty” because she was buried in luxurious clothing while holding gifts that include a makeup box and a mirror. According to the archaeologists that discovered her, she may well be close to 2,000 years old. 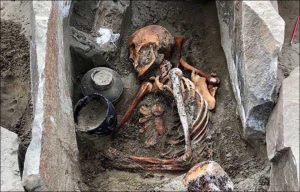 The body of “sleeping beauty” was buried in a silk skirt with a pouch of pine nuts on her chest. These were among the several expensive items found in her grave. Also found was a gemstone buckle on a beaded belt and a mirror. They were placed in her grave to take with her to the afterlife. The body was accidentally mummified in the stone tomb. Mummification occurred because of the extreme cold or lack of oxygen. 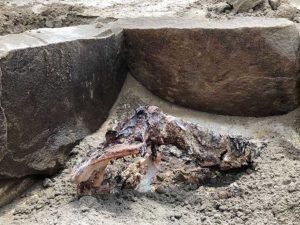 “This is not a classic mummyâ€”in this case, the burial was tightly closed with a stone lid, enabling a process of natural mummification,” said archeologist Marina Kilunovskaya. The team that discovered the mummy was from St. Petersburg’s Institute of History of Material Culture. They stumbled upon a stone box just upstream of the dam and found that the corpse inside was in good condition with soft tissues, skin, and clothing still intact. They also found a vase that appears to be made from an ancient group of people called the Hun.

“Astonishingly, the grave’s contents were preserved despite being underwater for long periods since the dam became operational in the 1980s,” said Natalya Solovieva, the institute’s deputy director.