Walter Erickson is an 80-year old retired teacher. He has been a substitute teacher at a Minneapolis school district since 1991. Even when he is not in class, Erickson spends most of his days at the Champlin Park High School, especially during the school year. But recently, he has not been able to be at the school because of his wife’s declining health. But his students grouped together and decided to give back to the teacher that has meant a lot to them.

“He’s just impacted so many of our lives in amazing ways,” said Katie Blodgett, a senior at Champlin Park, “He’s the kind of substitute teacher where he connects with us more on a personal level and he obviously loves what he does and that makes it more encouraging for us to learn.” 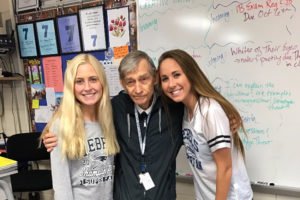 Erickson has been saving up to pay for his wife to get surgery on her eye and her cataracts. There is also much needed dental work to be done for his spouse. When some of his students found out that the surgery may not be covered, they decided they wanted to help out. Blodgett and a few of her friends started a GoFundMe page and asked for small donations from students for their teacher.

“Kelsey and Hailey are trying to raise money for a staff member of Champlin Park High School. Mr. Erickson and his wife have been struggling with money for many years. Mr. Erickson still substitutes for teachers most days as he cannot retire due to paying for his wife’s medical bills over many years. September and October can be the hardest months for the two and the money would benefit them in the coming winter months.” 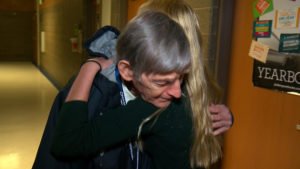 “Mr. Erickson has impacted Champlin Park students for many years and it would be great if students, staff, and community members could give back to him in this way.”The students wanted to raise as much money as they could and they had a conservative goal of $500. But in a little under a week, they were able to raise over $13,000.

“When I told my wife about this last Friday, she said, ‘Who are these girls? What kind of parents do they have that they could be so caring and compassionate?'” Mr. Erickson said. Erickson also added that he and his wife are overwhelmed by the generosity of his students.Â  “I know my wife will appreciate it very much,” he said. “Thanks a lot, really a lot.”