Earlier this week, a viral video came out taken inside a Puerto Rican school. The video showed students erupt in cheers and dance inside their classrooms. The reason for this joyous celebration is that the school finally got its power back. The school had previously been without power for the past 112 days, or for the past 16 weeks, or the past four months. 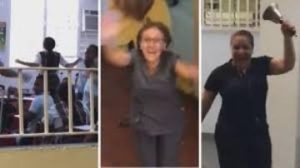 The video was taken inside a school where you could clearly see the students inside the classrooms celebrate as the lights came on. But it’s not just the students that are happy, you could also clearly see the teachers jumping for joy and waving their hands around in celebration. There is even a teacher that can be seen ringing a bell as she rounds the halls of the school. The school in the video is the Academia Bautista de Puerto Nuevo in San Juan, Puerto Rico. The last time the school had power was September last year.

The school was part of the many institutions in the country that lost power after the devastation caused by Hurricane Maria. The Hurricane hit the island nation just two weeks after Hurricane Irma, which had already shut down most of the power in the country. After Maria, the entire island went dark. It would take weeks before power would return to the island. But the country is slowly recovering and power is slowly coming back to parts of the island, mostly in the cities and most populated areas.