Last week a school bus driver from New Jersey was given a huge surprise by students and parents. The driver was a vital part of the community and the students and their parents wanted to give something back to all that he has done. And so he was surprised with tickets to watch this year’s Super Bowl to watch his favorite team the Philadelphia Eagles play against the New England Patriots. 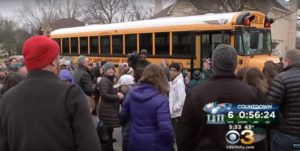 For 26 years, Gary Kelmer has been the bus driver for the Mount Laurel school district in New Jersey. For close to three decades, the 66-year old Kelmer has made a name for himself as one of the nicest guys in that area. He is also known by many as one of the biggest Philadelphia Eagles fans in Jersey. Led by parent Amy Smith, the community started a GoFundMe page and raised $5,000 in just five days to buy tickets for Kelmer and his wife to watch the Super Bowl. The package included two personalized jerseys and their air fare to Minnesota. 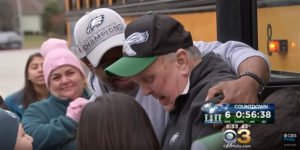 And so last week, more than 60 students and parents gathered together to surprise Kelmer on his last stop of the day. They all cheered for him as he got off the bus and presented him with his jersey and his Super Bowl tickets. Kelmer was overwhelmed by emotion and touched at the generous gesture. And on the following Sunday, Kelmer was able to live out a lifelong dream as he watched his beloved Eagles win the Super Bowl in person.