A group of young men in Spokane, Washington has garnered a lot of attention thanks to their peculiar Craigslist advertisement. The ad requested for a “Generic Father Figure” or a cliche “BBQ Dad” for their upcoming father’s day weekend cookout. The cookout will feature an old-school grill and all that’s missing is the classic beer-loving, grill-cooking, sports fanatic father figure to oversee all the grilling and cooking.

College student Dane Anderson says that he was really looking forward to a father’s day cookout that he and his roommates were planning. The only problem was, they didn’t have a father figure to celebrate it with. According to them, their own father’s are either too far away or too busy to join them, so they put up an add asking for one of the fathers in the Spokane area that would want to fill the role of the traditional BBQ dad.Â  The ad also made it clear that they were not looking for just any middle aged man with kids. They specified that they wanted their “dad” to have a “minimum of 18 years as a father,” and “a minimum of 10 years grilling experience.” The applicant must also love drinking beer and they prefer their dad to be named either “Bill, Randy or Dave”. 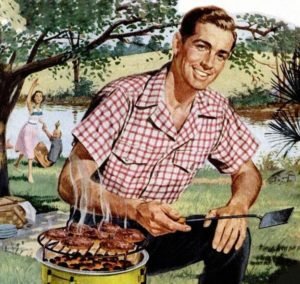 Aside from doing all the barbecue work, the father will also be required to drink beer, chat with Anderson and his friends, while referring to the young men as “Big Guy, Chief, Sport” or “Champ”. The father is also required to discuss father-like topics such as “lawnmowers, building your own deck,” and “Jimmy Buffet.” The role of BBQ dad does not pay much but the ad promises to provide “all of the food and cold beer that his heart desires.” Anderson has received several offers from several dads in the area but the young men have decided to hold out until their ideal dad, Bill Murray, will be available.