A student in Hamilton College in New York got the fright of her life when she found a 5-goot snake behind the fridge in her dorm room. Although the snake was a python, meaning it was not poisonous, it was still very dangerous. The snake actually belonged to another student in the school and it had escaped its enclosure during the night. It was believed to be a boa constrictor or a ball python. 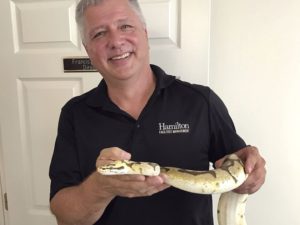 Campus security was immediately called when the snake was spotted. The student that found the python was reportedly very upset. According to Francis Coots, the Campus security director, the student who owns the snake could face consequences because animals are not allowed on campus. The owner did say that he plans to take it back to his parents’ home. The snake was initially removed from the dorm with the help of the Utica Zoo. They called in Judy Cusworth, who owns Woodhaven Wildlife, to collect the snake until its owner returned to pick it up. 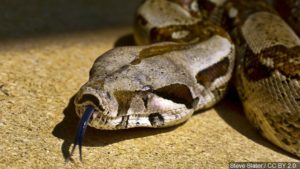 “The fact that it’s a boa constrictor should give someone pause,” she said, “What if he wrapped himself around someone’s neck while they were sleeping?” According to Cusworth, the owner had placed the snake in a plastic tote with a lit that had breathing holes. But Cusworth said that the snakes very good escape artists.

“It’s a little early to say whether there’s going to be any type of disciplinary action, but since he did violate the policy of the campus, not allowing animals on campus, he would be in violation of that,” said Coots.