94-year old Suratman (just that one name) was selling his bananas on the side of the street on the island of Jambi on Sumatra Island, like he always does. Then one day when he was brutally robbed. Not only was his fruits and his take from the day taken, but he was also robbed of his life savings, which was worth an estimated one million rupiah. Thankfully he was spotted at the side of the road by Tommy Reza. 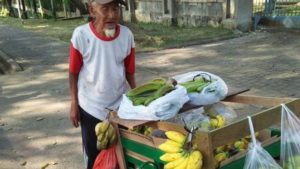 After comforting Suratman, Reza told the story of what happened on his social networking account. The story of Suratman went viral and was shared more than 70,000 times. The story was also able to raise awareness about the plight of Suratman. People from all around from around the world had felt for Suratman and asked Reza on how to get in touch with theÂ vendor. People started to donate money for the recovery or Suratman, and also so that he could rebuild his life after such a tragedy. 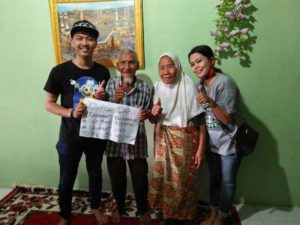 The incident occurred when Suratman was approached by a driver to enter his vehicle so he could buy some fruit. he driver explained that he was too embarrassed to be buying food out in the open during the holy month of Ramadan. When they got him in the car, the occupants ordered Suratman to empty his pockets then kicked him out. That’s when Reza saw him by the side of the road. Most of the reactions in social networking were angry about the incident, but most just wanted to help out Suratman. So far, donations have reached 42 million rupiah or close to $3,000, including 5 million rupiah from the local governor.