Newlywed Couple Gets Ride to Reception in Fire Truck

Justin Stone and Maria Leonardi were getting married in Connecticut earlier this week and everything was going according to plan. But while they were taking wedding photos of their ceremony at the West Avon Congregational Church, the realized something was wrong. The bus that they had used to get to the church, and that they were going to use to get to the reception, was suddenly on fire. 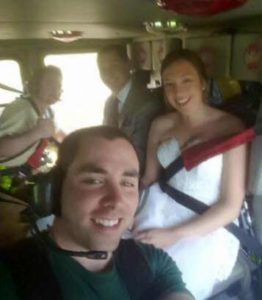 Guests had heard about the bus smoking and sparks coming from the engine. They thought it was all a joke until the fire erupted and fire department appeared minutes later. The Avon Volunteer Fire Department showed up to put out the fire on the bus. It was only until they had taken out the fire that they realized the bus what the newly wed’s ride to their own reception. And in the line of duty, the firefighters offered their fire truck as their ride to get to the reception of their wedding. 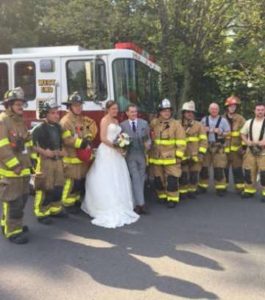 “One of the crew came around during our photos outside and said, ‘I’m really sorry about the trolley fire. If you’d like, we’d be happy to drive you to your reception,'” Stone said. “Maria and I both looked at each other and said, ‘Absolutely, that would be amazing!’ We cannot thank the fire squad enough. As volunteers, they do so much for the Avon community and it really was above and beyond for them to take an hour out of their day to pose for pictures with us and drive us to the ceremony. I don’t think we could have crafted a better and more memorable entrance to our reception.”