Earlier this week, an act of kindness was witnessed on a train in Israel when a young woman distraught with her electric bill was rescued by a stranger who wanted to pay the bill himself. According to a Facebook post by Daniel Danino, a woman was crying in tears begging the Israel Electric Company to consider her family’s circumstances and reconnect the electricity despite owing $500 in debts. 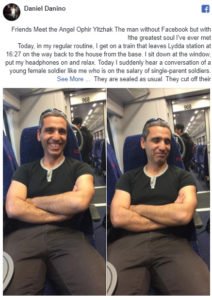 That’s when a man nearby overheard the young woman and offered to pay the bill himself. But he didn’t just pay the bill and the outstanding debt of the young woman so that the power could be reconnected to her home. He also gave the electric company his credit card information over the phone to the So that they could charge him for it.

“Friends, meet the angel, Ofir Itzhak, the man without Facebook but with the greatest soul I’ve ever met,” Danino wrote with photos that she took of him.”Today I suddenly hear a conversation of a young female soldier like me who is on the salary of single-parent soldiers. They cut off the electricity and she cries hysterically, and suddenly an angel comes from nowhere.” 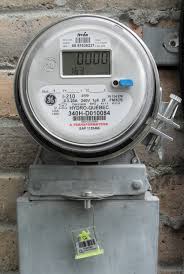 “I get off the train with hope and faith in people. There are still those who do things for others without expecting anything in return. I was left with my mouth hanging open, speechless, and full of a sense of pride in being a part of this nation that galvanizes to help others during times of distress. Friends, share this post, so that it reaches people who know this amazing guy so they can be filled with pride as well.”