A group of EMT workers from the Toms River First Aid Squad in New Jersey entered an IHOP for a much deserved meal. They were coming from graveyard duty and they were in need of good food. But when they asked for the bill, they got an unexpected surprise. Their bill had already been paid in full by a stranger. The anonymous person didn’t leave a name. But she did leave a not thanking them for all their work and it was signed by “recovering addict”. 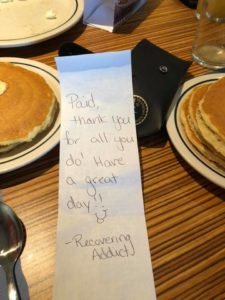 “To the woman who paid our tab today at IHOP, thank you so much for paying for our breakfast,” Toms River First Aid Squad wrote on their official Facebook page. “This gift was amazingly thoughtful, and brought our table of tired EMTs to tears. We are so blessed to be able to serve you and everyone else who lives and works in the greater Toms River area. Good luck on your journey of recovery!”

“It was just a reminder that there is still so much good in the world. The note and paying for our breakfastâ€¦we are a boisterous bunch and that brought our table to complete silence. We were practically in tears.” said Captain Alyssa Golembeski of the first aid squad. 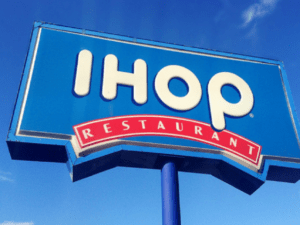 According to the captain, her crew usually spends time at the restaurant for have breakfast together after an overnight shift. They didn’t have a way to contact their new friend, so they decided to post the story on social media instead. The bill for the breakfast of six squad members was $77.