In Massachusetts, a woman shared a moving picture in social media about a young man helping an elderly man down the escalator. In the photo, you can see that the young man even has his arms linked to the older gentleman as they go down the escalator together. It was a peculiar photo of two people who you would never think would be linked arm in arm going down an escalator. The picture was posted by Paula Accorsi Picard on her social media account, and has since gone viral. 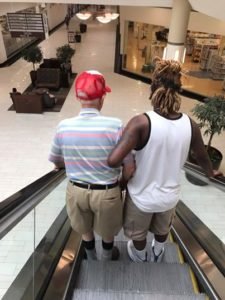 According to Picard, the older man was hesitating to go down an escalator and a crowd was beginning to form behind him. Then a young man asked him “Can I help you on, sir?” The older gentleman then explained how he had gotten stuck before on an escalator and he was a little scared to get back on one. There have been several incidents of senior citizens falling on escalators in the past, and he was well aware of them. The crowd continued to grow behind them, but the young man reassured the older gentleman and they both stepped on to the escalator together arm in arm. 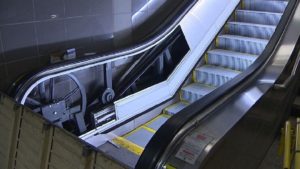 “Today, violence, race, age, politics and other social lines were blurred and one person simply helped another,” Picard said on her post, “I wanted to hug both of them. Whoever this young man is, your family raised you right! Thank you!” The post was shared earlier this week and has gone viral with more than 175,000 shares and over 21,000 comments. Most comments mirror the sentiments of Picard in praising the young man.