Man Proposes Girlfriend on School Bus Where They First Met

Eric Cardwell from Alabama has always had a secret crush on Traci Self, a schoolmate of his at the local high school. He had been schoolmates with her in middle school and high school, but he never had the courage to ask her out. One reason was that he didn’t think she would like him, and the other was because she was a few years ahead of him. He would always just stare at her when she got on the school bus. But 30 years after their school days, he Cardwell would be proposing to Self on (almost) the very same bus. 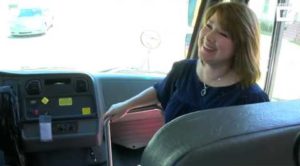 According to Cardwell, he just looked up on the bus one day and saw her and was immediately taken. It was something that he kept to himself and by the end of the school year, she graduated and he thought he would never see her again. They eventually led separate lives, graduated college and married other people, and even had children. But both their marriages also ended in divorce. Then they connected on Social Media a few years ago. This turned into messaging, then a into a first date, and finally they were seeing each other. 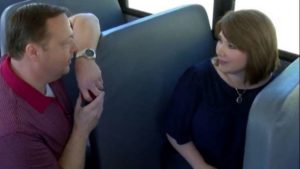 Cardwell knew that she was the one and he was going to propose, but he wanted to do something special. He wanted to take it full circle to the place where it all began. He tried to track down the same bus where he first saw her, but it was impossible to find. Instead, he rented a school bus and pasted the bus number from his high school on the side. When Cardwell invited Self on the bus, she found him on his knees with a ring in his hands. Self was surprised and shocked but she ultimately said yes at the romantic gesture. The couple plan to get married next June.