In Fort Worth, Texas, Officer Damon Cole was dressed as the superhero Batman as part of a child safety fair at a local Walmart. Officer Cole dresses up as superheroes in his spare time and visits children with cancer. But then one of the customers at the Walmart started behaving suspiciously. The greeter at the store tried to stop the shopper after he set off the alarm, but the man just kept walking toward the parking lot. So Officer Cole, dressed as the dark knight, went after him. 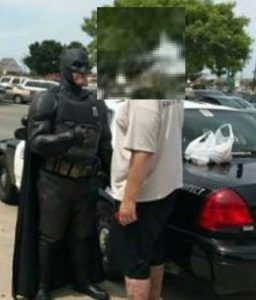 According to Cole, he stopped the shopper and introduced himself as a police officer. He went back to the store with Cole and initially denied that he stole anything. He eventually admitted to shoplifting four DVDs. Ironically, one of DVDs was of the movie “Lego Batman”. When Cole found out, he looked at the suspect and said “You can’t steal my movie, man.” And both of them laughed. 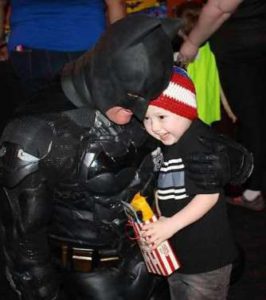 The shoplifter told Cole that he was down on his luck and just wanted to get the DVD’s for his 5-year old son. Cole was sympathetic with the thief being a father himself, but told him that what he did was still wrong. Because the merchandise stolen was worth less than $100, the man was only given a ticket. After he was handed the ticket, he asked Officer Cole for a selfie saying it was not every day that you get arrested by Batman. Cole complied and posed for the picture with the shoplifter. It was all in day’s work for Fort Worth’s very own caped crusader.