Earlier this week, the Cornell Lab of Ornithology, along with the Harvard Museum of Comparative Zoology announced that they have identified a new species of bird. The bird is called the Vogelkop superb bird-of-paradise. It was called this because of the region where it is found in the country of New Guinea. 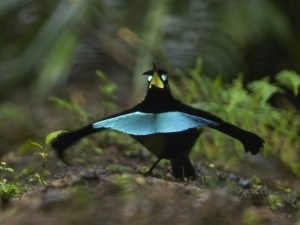 The female of the species has nothing special, with generic brown, gray, and white feathers. But the male of the species is all black bird with luminescent green-blue eyes and a yellow mouth and a streak of the same color along its breast. But that’s not the strangest thing about its appearance. During mating season, the male bird transforms into a bouncing fuzzy black ball with greenish-blue eyes and mouth that looks like its glowing.

The bird was thought to be a single species with the common superb bird-of-paradise, but the researchers from the Ornithology lab and the Harvard museum have identified it to be a different species altogether. The Vogelkop species was officially determined to be another species earlier this month. The Vogelkop bird has different courtship calls, and different looking females. They also have a slightly different courtship dance. Both species sport a peculiar dance when they transform into the black ball with green and blue eyes and mouth.

The bird is known to eat fruits and insects, but they are prey on smaller animals such as frogs and reptiles. They can also be seen foraging for food on the ground. Although the bird is heavily hunted for its unique plumes, it is one of the most common and widespread birds in the forests of New Guinea.