Storm Chaser proposes to Girlfriend in front of a Tornado

Alex Bartholomew had a fantastic idea for a proposal with his girlfriend Brittany Fox. Bartholomew is storm chaser, and along with his friend and fellow chaser Jason Cooley, he wanted to make his proposal memorable and one of a kinds. He had the engagement ring in his pocket for a few months and he was just waiting for the right moment. Then as they chased down a tornado, the idea came to him. 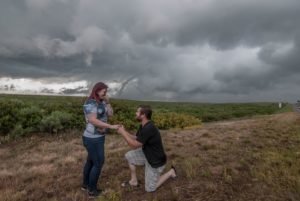 Each year, Bartholomew takes a few weeks off to chase storms with his friends. This year, his girlfriend Fox decided to join him on his trip. Neither of them knew that to expect from the trip, but Alex was hoping for memorable weather to provide the backdrop of the milestone event. Fox had joined Bartholomew the previous year, they were unable to encounter a tornado. But this year, they were lucky enough to find one just forming on the horizon. 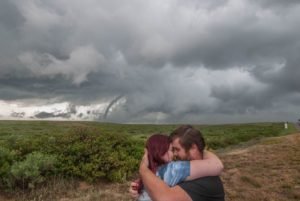 “We got out of the car and Jason was with us, and he had his camera out, and I assumed he was just going to take a picture,” said Fox, “I look over and Alex is on his knees and tears well up in my eyes, and I forget that there was even a tornado there. I always wanted to be with him so he can share what he loves with me,” she said.