Storks are Being Led Indoors in Bulgaria Because of Freezing Weather

In recent weeks, the weather in Bulgaria has been so cold that many animals have migrated or gone into hibernation. But there have been several storks that have not been so lucky and many birds have been found frozen to death. So many locals have taken to bringing some storks into their homes to keep them warm and alive. 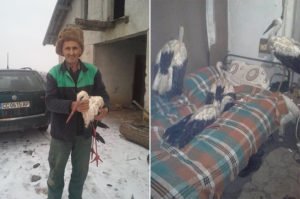 “I found five frozen storks near the village road the day before yesterday,” said 53-year-old Bulgaria local Safet Halil, “I took them home, lit a stove to warm them and fed them fish.” The act of kindness of Halil has gotten some attention in social media, and now several people in the region have taken his example and has followed suit. According to reports, there are now over 40 birds that have taken shelter inside people’s houses, garages, and even barns. 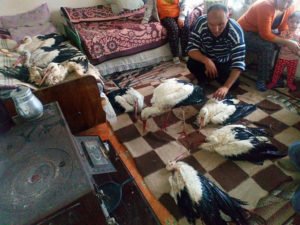 “It is minus three degrees Celsius (27 Fahrenheit) today and the weather is getting worse,” said Halil, “I already received two or three beak pinches on the arms.” He also added that despite the bites, the birds seem comfortable and happy inside their homes. Several pictures of Bulgarians taking in several storks in their homes have spread on social media. There is even a video showing a man pulling ice from the wings of a stork to get it warm.

Storks use soaring and gliding to fly, which require hot air currents. The cold weather makes it harder for these birds to take flight and fly to warmer territories in the south.