The late Steve Irwin was an Australian conservationist and television personality. He was popularly known as the “Crocodile Hunter”. Earlier this week, he was awarded a star on the Hollywood Walk of Fame. Steve’s son Robert, went on the Tonight show with Jimmy Fallon to discuss this event, and also showcase a few animals for Fallon. 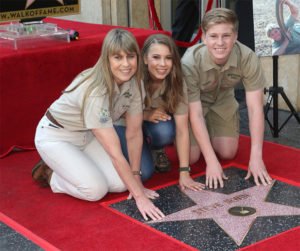 “It was such an amazing honor,” said the 14-year old Robert said, “He’s really one of the only conservationists honored on the Walk of Fame, so it’s great to continue his message and really keep his dream alive.” Robert also added that it was almost destiny that his father’s star was placed right next to Johnny Cash’s star. According to Robert, Cash was one of his father’s favorite artists.

“Whenever we’d go camping, Dad would sit by the fire and sing Johnny Cash. That was his thing, so it’s really special.” For the rest of the show, Robert would have made his father very proud by talking about his own love for animals and conservation. He was able to feature a few interesting critters in the interview, including baby pygmy goats, a 100-pound rodent, and a sloth. 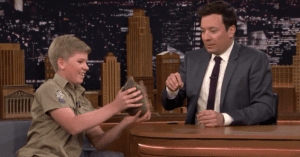 Steve Irwin was known for his energetic personality and his passion for nature and animals. He tragically passed away in 2006 after an accident with a stingray. He left behind his wife Terri, and his two kids Bindi and Robert. Both his children have followed in his footsteps in terms of conservation and the entertainment business.