Earlier this week, 31-year old real estate agent named Austin Hoffman planned an elaborate proposal that he had been building up for months. The plan was for Hoffman to bring his girlfriend Alison Israel to a fake Start Wars movie trailer premiere. Both Hoffman and Israel are movie fanatics and he wanted to incorporate their love for the cinema in his proposal. 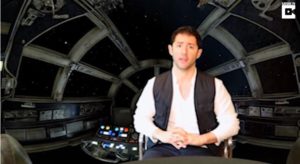 Hoffman and Israel had been together for 5 years, and one of the many things that they had in common was their love for movies. With the help of Proposal007.com and the local theater, Hoffman took Israel for a special screening of one of his favorite movies, Indiana Jones and the Last Crusade. He mentioned to Israel that there would be a special Star Wars trailer that would be showing in the theater.

“We go to the movies at least once a week,” Hoffman told InsideEdition.com. “I love Star Wars and wanted to do a movie trailer. I rented out the theater and two months prior to the proposal, I coordinated with Alison and told her to take the day off because they were showing Indiana Jones and the Last Crusade at 11 a.m. on this particular Friday.” 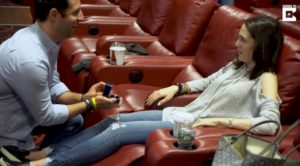 On the day of the proposal, Hoffman hired the staff from the theater to sit in the empty theater to pretend to be movie-goers. He even hired a photographer to capture the proposal. Right before the movie was to start he left and pretended to go to the bathroom. The “Star Wars” trailer was actually Hoffman dressed as Han Solo inside the Millennium Falcon. On the screen he asked Israel for her hand in marriage, at the same time Hoffman appeared in front of Israel and asked in person with a ring. Israel was surprised at first but said yes with tears in her eyes.