Square or Round Mug is Newest Optical Illusion Online Sensation

First there was the blue or white dress trending photo, and then there was the Yanny or Laurel audio debate. The newest internet sensation that has people debating is a video of a golden mug that is either round or square. People are having trouble figuring out the true shape of the mug. The video of the mug shows a normal looking mug, with a round shape. But then a reflection on a mirror shows it to be square mug. 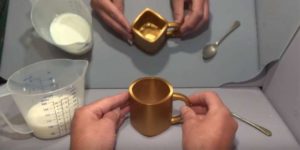 The video of the mug was provided by YouTube user Tony Fisher. He created the mug to look like the shape of a square and a round mug. It can be very confusing. On the video, you can see Tony fill the mug with milk and stir it around with a spoon. During this time, the mug still looks both square and round. The interaction proves that there are no camera tricks in play. The video has been share on social media where it quickly went viral. 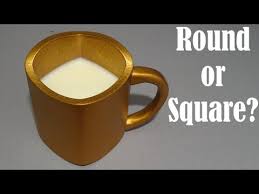 Either the mirror or the mug has an unnatural shape because when the milk it stirred, both shapes of the mug remain the same. The answer could be in the angle of the mirror in the background. The change in perspective makes it look like a square mug, because of how the lid of the mug is shaped, when it is in fact a square shaped mug. But then the same could be said the other way around. The truth could lie somewhere in the middle, but that won’t stop people from debating online and insisting that their shape is the true form of the infuriating mug.