Earlier this week, the most expensive signed baseball was sold on auction. The baseball features signatures from 11 of the first Baseball Hall of Fame inductees. The ball was sold for a whopping price of $623,369. Among the players that have signed the ball includes legends such as Babe Ruth, Honus Wagner, Cy Young, Ty Cobb, Tris Speaker, George Sisler, and other hall of famers. The ball was signed in 1939, when all 11 players were present during the very first induction ceremony. 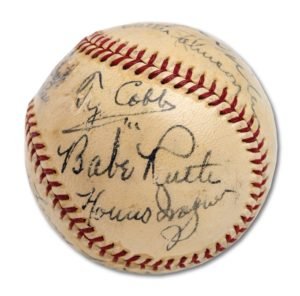 The other players that signed the famed baseball include Walter Johnson, Connie Mack, Nap Lajoie, Eddie Collins, and Grover Cleveland Alexander. All these players were part of the first Hall of Fame induction ceremony. There were initially 25 original inductees, but they were the only living members of the initial group. They were invited to an official induction ceremony to celebrate the opening of the Hall of Fame building. The signatures were taken during the weekend. 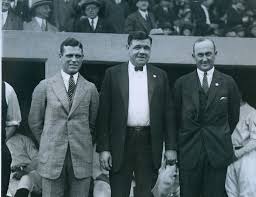 The ball sold for a record amount for a signed non-game used baseball. It is almost double the amount of the previous record. A Babe Ruth signed ball which was sold for $388,375 in 2014. According to Sports Collectors Daily, the ball was sold by Christie’s for $55,000 in 1997. In 21 years, the value of the autographed ball skyrocketed.

The ball was originally owned by former Chicago White Sox player Marv Owen. He was playing in an exhibition game at Cooperstown during the weekend. His former teammate Hank Greenberg brought two baseballs with him to get autographs from the 11 inductees. Greenberg was too nervous to ask so Owen volunteered to do it, and Greenberg gave him one of the baseballs as thanks. The ball was kept in a fur-lined glove in a safe deposit box owned by Owen for years.