Earlier this week, one of the most inspiring and touching sports event occurred when a high school student with Autism made her first career basketball shot during a high school basketball game in Kentucky. It was a special moment that was shared by her friends and family. The video of the shot was recorded and posted online, where it quickly went viral.

Kristian Shouse is a student at Christian County High School in Kentucky. She was able to go to school despite her having autism. It was in this school that she developed a close bond with Laderia Gold, a senior girls’ basketball player who serves as a student aid in the gym class of Shouse. Gold then invited Shouse to take part in her high school basketball team’s Senior Night ceremony last Friday.

Shouse wasn’t only made part of the team, but she was even made team captain. The game was being played against Hopkinsville, one of Christian County’s biggest rivals. Before the game started Shouse was informed that she would be starting the game. The other team was also notified of the special circumstance of their late addition player. 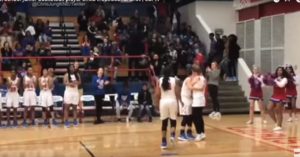 So on the very first play of the first quarter the ball was passed to Shouse. She tentatively took aim and took a shot. She swished the basket and the crowd went wild, with players from the other team applauding. Shouse made her very first shot on her very first attempt. After the basket, Shouse was then rushed by the other players on her team to celebrate the achievement.