When it comes to returning books to libraries, we have all been guilty of returning late books, especially when we were kids. But this family has to have the record for the longest return of an overdue book. One man returned a book to the Louisiana library that was overdue for 84 years. The book actually belonged to her mother and when he found it, he thought that it was only right to return the book to the library. 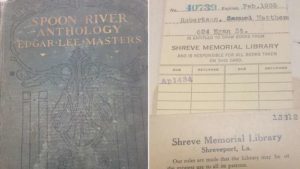 The book was entitled Spoon River Anthology and it was returned to the Shreve Memorial Library earlier this week. The book was written by Edgar Lee Masters. The book was found by the son of a woman who had checked out the book when she was only 11 years old. According to the son, he was cleaning the house in Shreveport when he saw the book. He decided to send it back to the library despite decades being late. The maximum fine for a late book is $3, but the library graciously waived the fee. 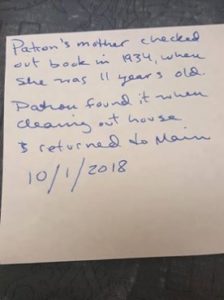 The returned book was posted in photos by the library on their official Facebook page. According to the library, the book was checked out in March of 1934 and it was due back on April 14. Books at libraries are usually allowed to be borrowed for two weeks at a time. The returned book is a compilation of poems written by Masters. Each poem is written in the perspective of a dead person in a fictional town.

“We thought that the title was appropriately spooky to turn up again after all this time right around Halloween,” said the library.