Snow Falls in the Sahara Desert

When you think of the Sahara desert, you think of brownish orange sands, large sand dunes, and maybe even camels and oasis settlements. In almost all cases, people associate the Sahara with desert heat. But rarely do people think about snow in relation to the great desert in Africa. But earlier this week, the desert which is also known as one of the hottest places of earth, experienced rare snow fall. 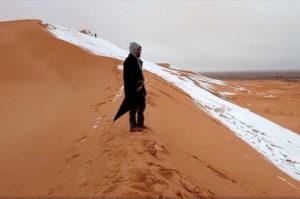 The snow fall occurred in the small desert town of Algeria Ain Sefra. The town is known as the “Gateway to the Sahara”. This town actually experiences snowfall more frequently than people think. While it is rare, it has occurred in the past. This will be third time in 40 years that snow has fallen on this part of the Sahara. The temperatures at the town reached 1 degree Celsius (33.8 Fahrenheit), which was cold enough to make snow fall on small sections of dunes. 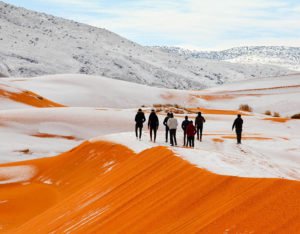 The snow fell on the early morning of last Sunday, before eventually melting in the hot morning sun of the desert. Before it all melted away, a few residents of Ain Sefra got to enjoy a little snow sliding in the dunes. This portion of the desert can get cold, especially during the winter months. But during the summer months, the temperatures of the area can reach around 35 degrees Celsius (95 Fahrenheit). The last time that snow fell in the area was December 2016. Scientists have said that this rare phenomenon might occur more often, especially with the effects of recent climate change.