In Australia, vets had to save the life of a huge snake that had swallowed a slipper whole. When the vet had taken an X-ray of the python, it showed how a slipper had been lodged inside the reptile. The snake was found by catchers Norman and Sally Hill. They were called after an elderly man reported that he had gone to sleep with two slippers only to walk up with one missing. 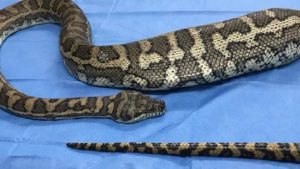 Days after the snake catchers were called, they found a snake inside the property of the elderly man. They captured the snake and that’s when they noticed that the snake had a large bulge in its body in the shape of a shoe.Â  The veterinarians posted pictures of the snake before and after its life-saving operation.

“You can’t make this stuff up folks,” they wrote. “This wild, coastal carpet python, was brought into the clinic by a local snake catcher after it was found in a home having ingested a slipper. This made for one of the most impressive radiographs I have seen. Surgery was performed under general anesthetic to remove the foreign object, with a procedure called a coeliotomy and gastronomy.” 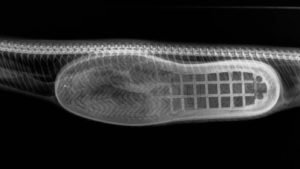 “The stomach was closed in two layers, the body wall muscle was closed and surgical staples were used for the skin (an 18cm incision). The snake was given fluids, anti-inflammatory and painkillers. He woke up well and is off to for rehabilitation in a couple of days.”

According to the snake catcher, the python may have been attracted to the slipper of the elderly man because a rat or possum may have crawled over it or urinated on it attracting the senses of the large snake.