Earlier this week, a skydiving Santa broke his leg after he crashed into a tree and a lamp post while trying to land on his parachute. The costumed Santa was Gerard Krokus. Krokus was delivering toys to the Beach Bums Operation Santa charity volleyball tournament at the Gulfport Beach, near Tampa Bay Florida. He was aiming for the volleyball court but slammed into a tree and lamp post nearby. 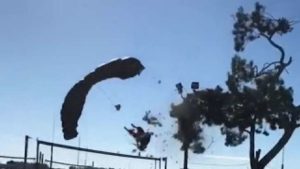 There was video footage of Krokus, dressed as Santa, coming down on his parachute to the courts. But instead of a smooth landing on the flat volleyball court surface, Krokus hit a tree and became entangled in it before hitting an adjacent lamp post and crashing into the middle of the nearby volleyball court. Spectators then ran over to see if Saint Nick was okay. It turns out that Santa had broken his leg. But before he was taken to the hospital, Santa smiled and asked someone to take a picture of him in his costume. 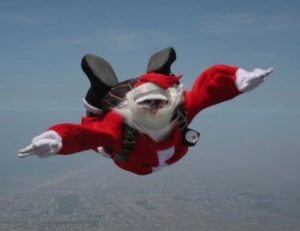 Krokus was then immediately taken to the hospital where he underwent surgery for his fractured lag. After his surgery, Krokus said that he had to go and make another delivery to a 9-year old girl named Madison Spiers. Krokus owed her a toy called an Elf on the Shelf. The elf’s name was Kristoff and appears on the shelf on Christmas to encourage kids to be good. The hospital told Madison that both Santa and Kristoff were recovering well at the hospital. Friends of Krokus have also setup a fundraiser page to help the skydiving Santa pay for his medical bills.