Man Risks Life To Save Rabbit From Wildfire

With all the news covering the terrible wildfires in California, we get some news of humanity stepping up. We get stories of other people lending a hand to strangers or helping those in need. There are even stories of people stepping up and helping animals as well. This was evident in a video that had gone viral that showed a man who pulled over on the highway, in the middle of the wildfires, to rescue a wild rabbit.

The video was taken in La Conchita, California where the wild fires were occurring. In the video, we see a man approach the dangerous fires looking around and chasing around something on the ground. At the end we find out that it was a wild rabbit that the man rescued from the fire. The entire incident was captured by a news photographer for RMG News who was at the scene. 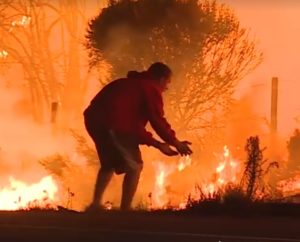 The video starts off with the man jumping up and down seemingly worried about something near the fires. He is clearly agitated at something on the ground. We then see the man call out with his arms outstretched at something around his feet. He even runs after it and chases it on all fours, just a few feet away from the dangerous fire. Behind the camera we can hear the photographer ask “What is he doing?” and someone else exclaim “He’s saving an animal!” when the man picks up a small rabbit from the ground. The man, who did not want to be interviewed, says the rabbit made it okay.