A six-year old named Adam Mohammad Amer has gone viral because of his love for airplanes and flying. A video of Adam was spread on social media showing the small boy enumerating complicated plane functions while chatting with pilots in a cockpit of an Etihad Airways flight. He impressed the stewardess with his enthusiasm, but he impressed the pilots even more with his technical knowledge of flying. 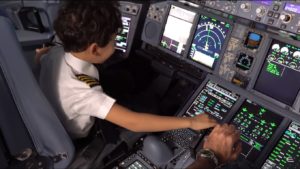 The crew of the flight first noticed that Adam was interested in flying and invited him into the cockpit. Captain Samer Yakhlef was so impressed with the youngster that he recorded some of their conversations in a video, which he posted online. In just a few days, the video became viral and was viewed several thousand times. The airline heard news of the talented little Adam and invited him to visit Etihad’s training academy to learn how to fly his favorite plane, the A380 Airbus. 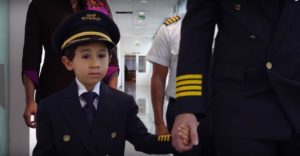 Adam’s day at the academy started with the 6-year old getting a custom-made Etihad pilot’s uniform. Then he started his very first lesson in the flight simulator. Adam managed to take off and safely land the plane in the simulator, with the help of his co-pilot, of course. The Airline said that he learned about some of the complex operational procedures from watching YouTube videos. Adam’s video on the cockpit and the video of his flight on the simulator have garnered more views than the flying videos he used to watch.

“Captain Adam, may your dreams fly high!” the airline said in a statement.