Sisters Go as the Witches of Hocus Pocus for Halloween 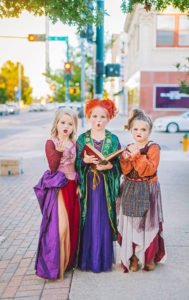 In the movie Hocus Pocus, the Sanderson sisters are sinister witches from Salem. They are reborn through a spell and wreck havoc in modern times. The three girls from Texas decided that this would be the year to dress up as their favorite magical siblings. They even have the expressions of the witches down pat. The sisters, 8-year old Landri, and twin 6-year olds Alli and Maddi, were dressed up by their mother Heather Grabenstein. 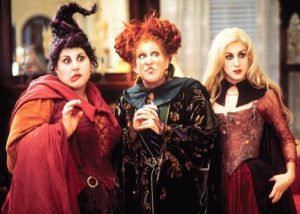 The Sanderson sisters are Mary, Sarah, and Winnie. They are portrayed by actresses Kathy Najimi, Sarah Jessica Parker, and Bette Midler. The 1993 film Hocus Pocus is a comedy horror film that wasn’t much of a hit when it was released. But it has since been a cult classic that has been replayed over and over, especially during Halloween season. It also didn’t help that Sarah Jessica Parker, who had a somewhat small role in the movie, also became a movie star years after the film was released.

The photos of the three sisters were taken by their mother who also runs Heather Rust Photography. According to Heather, the girls are “the sassiest little things!” and they lived up to the personality and look of the Sanderson witches.