Sister Rushes the Field Too Early to Celebrate Brother’s Touchdown

Earlier this week, a college football game between Western Michigan Broncos and Buffalo Bulls extended to seven overtime periods. The final score was a record breaking 139 points. The Broncos scored 71 points while the Bulls scored 68. But despite such an extraordinary game, the highlight of the day would have to be when WMU tight end Donnie Ernsberger scored a touchdown in overtime and he was rushed in the field by his sister. 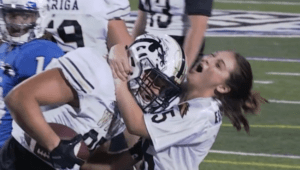 Ernsberger’s 14-yard touchdown was a critical play in overtime, but it wasn’t the game winner. It seems that his sister thought it was over and rushed the field to hug her brother at the end zone. But the game was not over and she had to be escorted out of the stadium for rushing the field. At that point the Broncos had cut the lead down to one point 38-37 and had to convert on the field goal to tie the game. Ernsberger’s sister was told to leave the stadium until the game was over. But not before the Broncos were issued a penalty because of the overzealous sister. 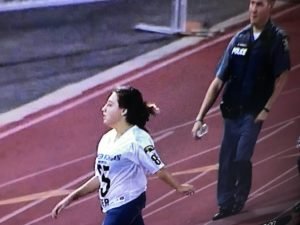 After the broncos converted the field goal to tie the score, the game extended to six more overtimes. Thankfully the Broncos were able to prevail by a slim margin of 71 to 68. It was a very close game and every play was critical. The field goal at the first overtime had to be taken a little bit further than usual because of the penalty caused by Ernsberger’s sister. Most people thought that the sister assumed the game would be won on the first point scored in overtime, much like professional hockey.