The spiky and exotic fruit called durian has long been considered as a delicacy in Southeast Asia. The fruit is very divisive, and you either love it or hate it. But one thing is for sure, the smell of this fruit is very distinct and powerful. The odor of the durian is so strong that it is strictly banned in most hotels and public transportation. But for this cafÃ© in Singapore, they embrace the smell and taste of the fruit as the theme of their place. The Mao Shan Wang cafe in the Chinatown district of Singapore offers a very special menu with the fruit durian included in almost all of its dishes. They even have durian ice cream. The name of the cafÃ©, Mo Shan Wang, is Chinese for Cat Mountain King. It refers to a strain of durian from the Kelantan state in the neighboring country of Malaysia. This strain of fruit is different because of its bittersweet taste and smaller than usual seeds. 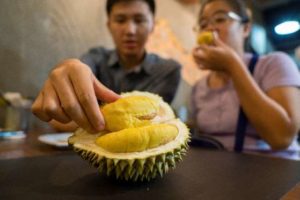 While there are a lot of fans of the smelly fruit, not everyone likes it. Some have described the smell as a mix of old laundry, wet garbage and rotten onions. Some enthusiasts have compared the fruit to the intense flavor and smell of blue cheese. The fruit is usually eaten by its own as a desert, or as the Mao Shang Wang cafÃ© has done, added into uniquely savory dishes. The cafÃ© offers chicken nuggets with durian dip, pizza with durian toppings, fries with durian sauce, and of course, durian infused coffee.

“Durian is (usually) eaten by itself and as sweets or treats, but what our company wanted to do was put it with savory stuff like fries and nuggets,” said company spokesman Lance Lee. “We will be looking to expand the offerings as well, with maybe rice, pasta and other things.”