An Israeli shepherdess named Jenna Lewinsky is raising a flock of Jacob sheep using modern techniques. But she is doing this to revive an ancient sound of the “shofar”. The shofar is a piercing note made by a horn made from the Jacob ram. In the northern Israel town of Ramot Naftali, Lewinsky has learned of a way to raise this particular sheep and revive the ancient tradition of sounding the horn and making the shofar sound. 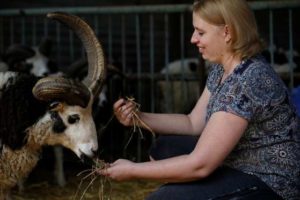 The shofar sound is mainly used in Jewish religious ceremonies, but it hasn’t been used in generations. Lewinsky is trying to change that by breeding a flock of Jacob sheep as a form of religious calling. The Jacob sheep rams can grow up to six horns on each animal. The breed of sheep is ideally used to make the horns for the shofar sound. The horns are usually blown in special occasions such as the Jewish New Year, and the Day of Atonement, the holiest day in the Jewish calendar. 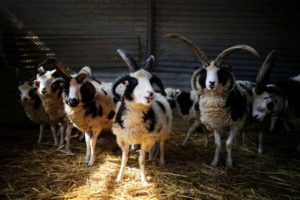 This particular breed of Jacob sheep was bred in England in the 17th and 18th century. Lewinsky had to fly an entire flock from Canada to Israel two years ago. This breed has been known to roam the meadows in the Middle East. The breed’s name comes from the story in Genesis where Jacob took spotted sheep as wages from his father-in-law, Laban. According to Lewinsky, turning her sheep’s horns into shofar horns is part of her religious experience and she calls herself a “traditional and God-fearing Jew.”

“The Jacob Sheep horns can probably be processed anywhere in the world but what makes the horns special is that we are processing them in Israel, which gives them a holiness,” said Lewinsky.