The footprints were found in the sandstone desert area on the Dampier peninsula in Australia. Scientists in the area have been able to discover more than 20 different types of fossils, including several other footprints. But these set of footprints are headlining the discovery as it is said to be the biggest ever discovered. Many of the footprints are also of sauropods tracking their movements. Scientists have called this the most diverse dinosaur track fossils in recorded history. 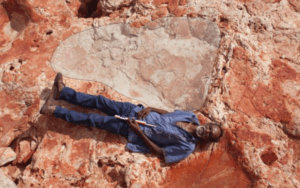 The area in Australia is said to be full of many other groundbreaking discoveries. This is highly uncommon as most dinosaur discoveries were usually found in the eastern part of the continent. Most people have even come to call it the “Jurassic Park” of Australia. Other species found in the area include stegosaurs. Sauropods were gigantic long necked dinosaurs that roamed the planet more than 120 million years ago. Since the discovery of the footprints, other scientists have been called in to investigate. This includes dinosaur experts from James Cook University and Queensland University.