In a week full of anger and despair because of the terror attacks in London, there is also good news to be found if you know where to look for it. During the recovery and rescue operations in Westminster, a muslin-born restaurant owner named Ibrahim Dogus, opened his establishment to house and feed service workers that were in the area after the attacks on the bridge.

Initially, authorities told Dogus to evacuate the area and close his restaurant for his safety and the safety of his customers. But Dogus decided to keep his restaurant, named Troia, open so that service workers such as emergency personnel and police officers had a place to eat, drink, and keep warm. Not only did Dogus offer his establishment for these people, but he offered everything (including food and drinks) entirely for free. 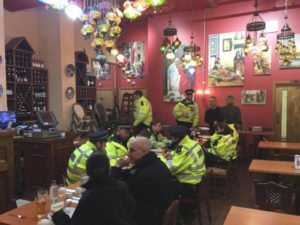 Dogus stated that he wanted to support these people who were doing them a service in their jobs. Not only were they protecting civilians, but they were also risking their lives in doing so. Dogus said that some of the service workers attempted to offer him money, but he declined. He stated to everyone that the restaurant would not take any money from any of the officers and service workers. There were n estimated 300 to 500 workers who came in that night including police officers, London Fire Brigade, and London Ambulance Service.

“We wanted to play our role in terms of supporting the emergency crew.” said Dogus “This was happening right at our doorstep. If you walk two seconds on my doorstep I would be on the bridge. I use the bridge to take my kids to school, not on that day, but I live next to the area, I work next to the area.”