Scientists in Argentina have discovered the bones of a dinosaur that would have weighed more than 70 tons. That mark makes it the biggest dinosaur ever discovered, and also sets the record as the biggest known land animal ever to walk the earth. Only a few species of whales are bigger than the extinct dinosaur. The dinosaur was named Patagotitan Mayorum, after the region where it was discovered (Patagonia), and after the Mayo family, who owned the farm where it was discovered. 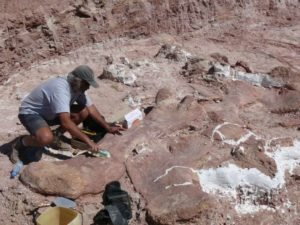 The Patagotitan was described in detail for the first time during the proceedings of the Royal Society B: Biological Sciences. The study also reveals how and when the dinosaurs evolved from being big to reaching immense sizes like the Patagotitan. The Patagotitan was 120 feet long and scraps of fossils show that the animal was still growing. The 150 bones found on the farm make up only 30% of the animal’s full skeleton. Most animals that are this large, called Titanosaur, are discovered with only parts of their complete skeleton. 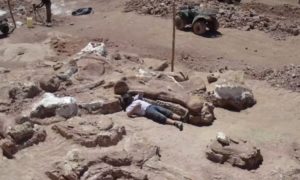 “This is clearly a very, very large animal, and there’s a lot of it, and that’s an extremely rare thing as these animals go,” says Matthew Lamanna of the Carnegie Museum of Natural History, “Patagotitan is going to continue to yield insights into anatomy and biology and even the size of these giant titanosaurs for years to come.” According to the study, it took 18 months to excavate the bones. The site also contained bones from at last 6 different animals. Despite its immense size, the Patagotitan was actually a herbivore.