In the small town of Malmedy, Belgium, the residents there are planning to celebrate the local Giant Omelet Festival. The festival will push through even though there is a current health scare regarding the safety of eggs in the region. The Giant Omelet festival will be using at least ten thousand eggs for the traditional event held in the small town near the German border. There was a danger of the festival being canceled because of the rumors involving European eggs being tainted with insecticide. 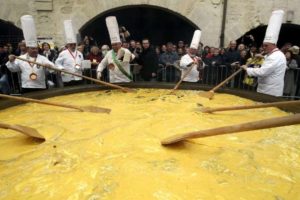 “I did not have any problem finding enough eggs, but the week has indeed been a bit different,” says Benedicte Mathy, the president of the local branch of the World Giant Omelette Brotherhood. “We have largely organized our own supplies, about 8,000 eggs which come from a farm some 40 kilometers (25 miles) from here so we know the quality.” Mathy has been organizing the Giant Omelet festival for more than 20 years. She insists that every precaution is being taken in using safe eggs for the omelets.

Aside from importing eggs from a safe source, they will also be using eggs from local supermarket chains that have sponsored the event. The Giant Omelet festival draws a lot of people to the small town of Malmedy. Last year alone, a record 7,000 tourists visited the town to witness the giant omelet being cooked in a giant skillet in the middle of the town square. Mathy is confident that the festival will be a success and event points out to another contamination scandal in the 1990’s where the some eggs in the region contained a toxin. But even then, the Omelet festival took place and it was a deemed a successful event.